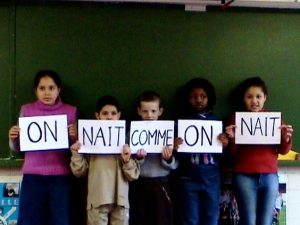 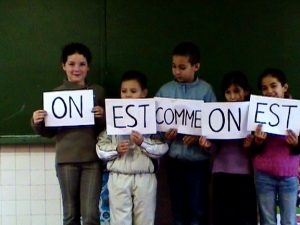 “Sometimes, when I wanted to talk and the words wouldn’t come, my family would talk in my name. So I became silent. Some people reproached me for not talking, how could I explain to them that I was talking, but they hadn’t understood”  Florence Decourcelle, actress in la Compagnie de l’Oiseau-Mouche

Paroles d’oiseaux, was a project initiated by  la Compagnie de l’Oiseau-Mouche. This company, based in Roubaix, in Northern France, is made up of 23 professional actors, all with some kind of mental disability. The company has existed for over twenty years, and their productions with invited directors have toured all over the world. For their first piece for young audiences, they wanted to address a young public (children of primary school age) on the theme of ‘difference’.  Rather than choosing a pre-existent text, they wanted to speak “in their own words”. The whole company were to be involved in the project, all the actors were to participate in the writing process…

The result was a show with texts and songs written collectively by the company, with a curious cast of characters, the Stranger, the Queen on Wheels, Monsieur Ouk, two pantomime birds and a toy dog. Phoebe Dingwall painted the large abstract backdrops which were wheeled around on a strange,metal, and not very functional mechanical device. We also went into local schools to research and film.

Marvellously poetic, the beautifully coloured world of Parole d’Oiseaux, directed with humour, dexterity and depth by Kate France is also serious and tender. This original work, which came about from the desire to talk to young audiences about disability in a funny but responsible way does just that by guiding us towards an understanding of what it is to be “different”. “Not like the others” is written up in black and white “We are all different” “We are all afraid” . Strong messages to convey that we are always afraid of what we don’t know and don’t understand…” (Brigitte Lemery, La Voix de nord 22/11/2003)