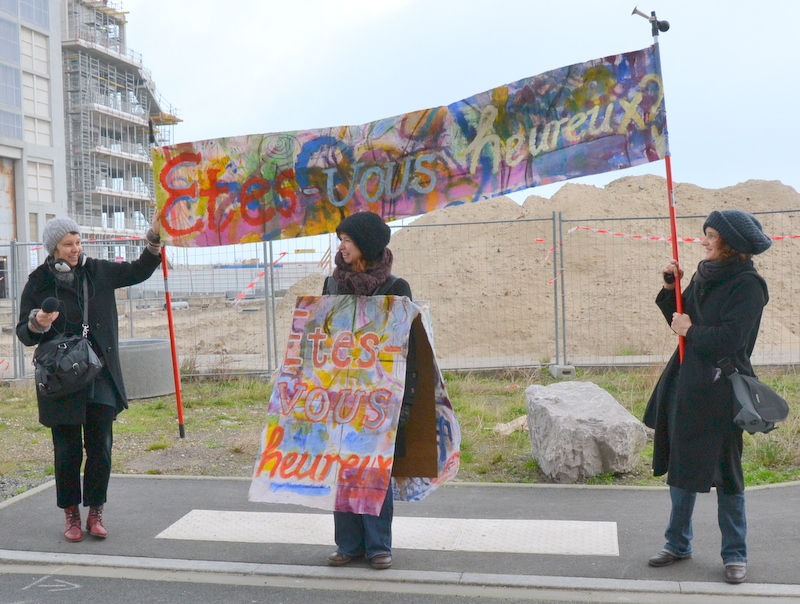 The project was based at a social centre in Neptune Grand Large, an area in Dunkirk on the site of the former shipbuilding yards, which were formerly the heart of Dunkirk. The area was, and still is, in the throes of development; industrial buildings are hollowed out and transformed  into sports complexes, public art galleries, and social centres, and new residential blocks spring up every few months.

In this brand new neighborhood, with a heavily symbolically charged past (nearly everybody in Dunkirk had some kind of connection with the shipyards), social cohesion is very embryonic.

Taking our starting point from the seminal film made by Jean Rouch and Edgar Morin in 1960, Chronique d’une été, originally entitled Comment vis-tu? (How do you live?), our first action was to go out and find the people who live and work in the sector and ask them: are you happy?

Following this first encounter, 30 people came to be interviewed on their attitude to happiness in a specially constructed booth in the LAAC,(Lieu d’Art et d’Action contemporaine) The interviews were recorded as Phoebe simultaneously drew a portrait of each participant. (Rendez-vous N° 1, la boite à bonheur).

We then developed the material to make an exhibition of films, drawings and photos at the LAAC in April 2013 (Rendez-vous N°2 histoire(s) de bonheur).

The third stage of the project was  a walk-through performance with video, live music, paintings and even cooking at the theatre La Piscine in June 2013.(Rendez-vous N°3 Êtes-vous heureux?)

with : residents of Neptune Grand Large, pupils from the secondary schools Van Hecke and Guilleminot, the staff of Dunkirk Central Library, Mr Barroy, children from nursery schools and members of the Savate Boxing Club